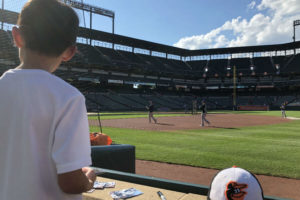 Daniel and I went to the Orioles game the other day and had the most amazing time. He decided he wanted to go early to try to get autographs. So I asked friends and did some research, and we went two full hours before the game was set to start.

We brought six clean baseballs, a Sharpie, and his Orioles baseball cards.

Then we stood with a group of people who became almost our best friends and waited for the Orioles to come by to sign things for us.

But no one came. And we weren’t even that disappointed because the waiting was fun and hopeful, and there will always be another time we can try.

And then we got to see a wonderful win—11-2! With two home runs on two pitches!—and the foul balls came nearby but not too close. We even made it to the very end of the game for the first time.

The next day I was telling someone how we had waited for autographs, and he told me an insider’s tip on how to get players’ autographs. But it involved not actually seeing the player in person. To me, that’s all the fun. I once waited in line for hours and hours to get Cal Ripken’s autograph, and it was absolutely worth it. But it was because I got to meet him—not because I have his autograph.

I also have a double-exposed photograph of me and Cal while he’s signing his book. And that alone is priceless. 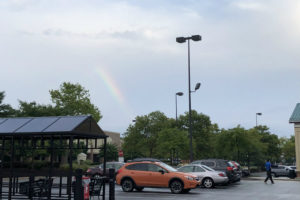 We’ve had a mixture of rain and sun this week, and one night I slipped out of the house to run to the store for strawberries. I cannot keep enough strawberries in the house to satisfy the strawberry fans, especially the one who’s preparing to start third grade.

When I pulled into the lot, I spotted a rainbow immediately. I stopped to take a photo, and then I looked around for someone to share it with. But there was no one nearby to point it out to. And people were driving by without noticing. 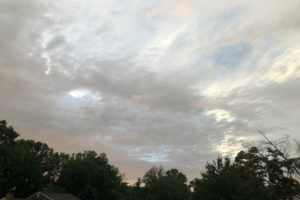 The rainbow reminded me of the other night when Daniel, who’s 8, said to me, “Mom, take a picture of that sunset!” I looked at the sky, and it looked like a totally ordinary sky. I almost said, “Wait…that’s not really a sunset. It just looks like the sky.”

Then I caught myself. Because who am I to judge God’s handiwork? And isn’t the sky perfectly beautiful even without pinks and purples and oranges? Why wouldn’t I take a picture of an ordinary and lovely sky? 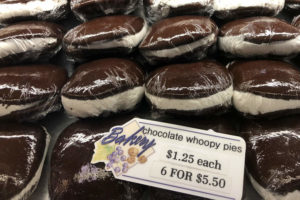 Last Friday my husband asked me what I wanted to do. We were all off together and had no plan for the day. It didn’t look like rain, so I suggested that we drive to the Green Dragon in Ephrata, Pa.

The Green Dragon is not a place I can describe well in words—you really need to experience it. But it’s an indoor-outdoor produce and flea market with an auction and treats galore.

I used to go when I was a student at Franklin & Marshall, and then after graduating, I would still go with friends from college. When I met John, I introduced him to it, and I’ve taken Leo once since then. But John and I hadn’t gone together in at least a decade, and we had never gone as a family of four.

What I loved was that the items we stopped to look at were things I never would have noticed as a college student. And we came home with a bunch of whoopy pies, which I have never bought before. My Green Dragon experiences are truly shaped by my fellow shoppers.

I refuse to start school supply shopping until August, so I waited until Aug. 1 this year. It seemed to me that all that was left were the dregs. Apparently I am in the minority waiting until August. I still feel I shopped too early.

One of my sisters is waiting until the first week of school to buy her children’s school supplies. She’s going to get everything on sale. She might not be able to find a three-zippered pencil case that is decorated with avocadoes, but she won’t miss what she didn’t know was available.

Come to think of it, maybe the school supplies weren’t completely picked over. 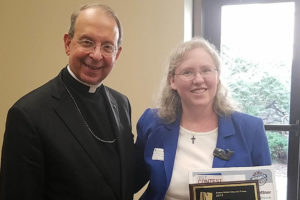 Yesterday I was invited to an awards presentation and lunch at the Archdiocese of Baltimore’s offices. I have the tremendous honor of writing on a freelance basis both for The Catholic Review and the Archdiocese, and they entered me in a few contests—and I won.

I was so excited to be included in this gathering, as the Archbishop presented the honorees with our awards. It was this wonderful, very personal ceremony, and then we had pizza and soda and conversation.

Afterward, I took a tour of The Catholic Review’s offices there before I headed over to the central branch of the Enoch Pratt Free Library to visit my sister who is a librarian there.

It was only after winding my way through the library, which is very much under construction, and taking the elevator up and down a few times, and having an interesting conversation with a man on the elevator about how to get to the third floor that I stepped off the elevator, looked around and said, “Oh no, it’s Thursday.”

My sister doesn’t work on Thursdays. But I had the most delightful conversation with one of her colleagues who does.

“I see that you’re carrying a stack of awards,” he said. “We should give you an award just for finding your way here! Let me see what I have on hand.” 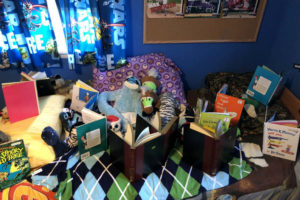 It’s August, so I’m starting to think maybe we need to focus on making more progress with our summer reading. The reading part we have actually achieved. It’s the reading-related projects that we haven’t completed. That’s because I can’t get excited about the projects, even though they are designed to be so much fun for the students. It makes me long for traditional book reports or maybe even making lists of vocabulary words you encountered in the book that you don’t know. Or…maybe not. That sounds pretty tedious.

Maybe we should just assign the summer projects to the stuffed animals since they are the ones doing most of the reading anyway.

You can find more quick takes on Kelly’s blog, This Ain’t the Lyceum, and have a terrific weekend!