As journalists for the Catholic Review, we are given the privilege of being invited into people’s lives during some of their greatest achievements, as well as in times of vulnerability. Our responsibility is to share those stories in ways that reinforce our Christian values, as well as appreciate the world around us.At the start of a new year, let’s take a moment to look back at some of those special moments from 2017.

A Night for Our Stars

Caroline Cooney, a 2017 graduate from The John Carroll School in Bel Air, helped organize a prom for students and adults with special needs in April. The county-wide event grew from 20 participants in 2016 to 175 this year. The Harford County school is looking for this to become an annual tradition.

The Archdiocese of Baltimore lost a giant with the March death of Cardinal William H. Keeler. He fostered interfaith dialogue, was a major proponent of Catholic education and restored the Basilica of the National Shrine of the Assumption of the Blessed Virgin Mary, his final resting place.

What could arguably the biggest story of the year in the Archdiocese of Baltimore was the ordination of Auxiliary Bishops Bishop Adam J. Parker and Bishop Mark E. Brennan at the Cathedral of Mary Our Queen in Homeland in January. Approximately 2,000 people gathered on a sunny and mild January afternoon for the joyous and solemn celebration.

As we’ve learned through the death and resurrection of Jesus, there is no greater love than sacrificing one’s life for another. The same can be said for our service men and women who fought for our country. Some of those veterans were honored with a hero’s welcome at Baltimore-Washington International Thurgood Marshall Airport this fall.

Victory was sweet in 2017 for the Loyola Blakefield baseball team when it upset the favored Calvert Hall Cardinals for the Maryland Interscholastic Athletic Association A Conference double-elimination tournament in May at Harford Community College. It was the Dons’ first championship in 71-years. Read more here.

The Christmas season is at time of giving, renewed hope, peace and love. Two stories that closed 2017 exemplified those sentiments. Our final “Least of These” installment featured couples who adopted neglected children. Read more here.

The D’Orazio family of Federal Hill prove miracles happen every day. Brandie and Dan’s fourth child, Leo, was born with a life-threatening brain disorder, and was only expected to live hours after being removed from a ventilator. Eleven month later, the family cherishes each moment they with their son and brother. Read more here. 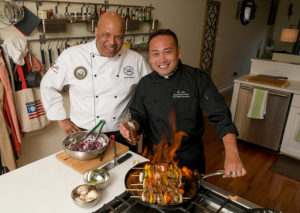 You know the old sayings, “Never judge a book by its cover” and “Everyone deserves a second chance.” Steven Allbright and others who appeared in our “Least of These” prison ministry installment are the perfect example. Allbright is an ex-offender who put himself through culinary school, and now works with Father Leo Patalinghug at The Table Foundation, a ministry Father Patalinghug established that employs and houses ex-offenders, as they return as contributing members of society. These two gentlemen made an indelible impression upon me, not too mentioned they prepare an awesome lunch. Read more here. 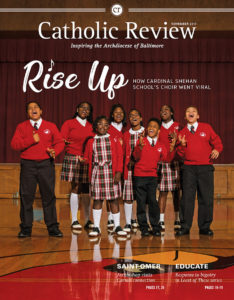 Facebook Live made the Cardinal Shehan School choir and its director, Kenyatta Hardison, an overnight viral sensation with their rendition of the Andra Day song “Rise Up.” As part of the archdiocesan Catholic Schools Choir, two Shehan Choir members first performed the rendition for the Archdiocese of Baltimore’s Partners in Excellence breakfast in September. Hardison recorded one of her choir rehearsals that received more than 20 million views. The group performed on ABC’s “Good Morning America,” and with Andra Day herself on “The View.” The Cardinal Shehan School choir was featured on the November cover of the “Catholic Review.” Read more here.

These stories are just a handful of the many we covered at the Catholic Review in 2017. We look forward to bringing more inspirational stories from around the Archdiocese of Baltimore in the coming year.

A great New Year’s resolution would be contacting your parish office about receiving the Catholic Review magazine monthly. You can always read stories at CatholicReview.org, as well as signup for our E-newsletter so you’re always up to date. Don’t forget to like our Facebook page, and follow us on Twitter and Instagram.

Here’s wishing you a blessed and prosperous 2018.