Don’t you just love clouds? I don’t think I look up at the sky often enough. I saw this one last night, and I loved how it was lit up from behind like a lightbulb. 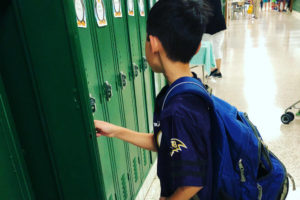 The school year is underway, and everything seems to be going smoothly. Our boys both seem to be happy, but there are always a few questions and concerns with a transition to a new grade.

One of our sons was worried when he heard they had “Read Aloud Time” every day. When reading doesn’t come easily, the idea of being called on to read can be terrifying. So I put on my “Mom Who Emails the Teacher with Questions the Very First Day” hat and wrote to his teacher. Her reply? Only the teacher reads aloud during Read Aloud Time.

I laughed out loud. Why hadn’t that occurred to me?

Even with summer vacation behind us, we still aren’t getting to bed very early. But I will say that the children are getting a little more creative about their delaying tactics. Any child can ask for a band-aid at bedtime. But last night ours started a conversation about whether Pontius Pilate was in Heaven or Hell.

You can’t just turn out the light and say, “Good night!” when there’s a deep theological conversation in progress. 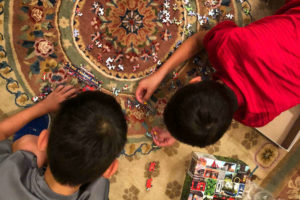 Last weekend we went to visit my in-laws. Sometimes I worry that our sons will be bored in a house that hasn’t had children in it for many years. But our boys bring their own little toys, and this time my father-in-law gave them a 500-piece puzzle to work on.

That kept their attention for a while, and they were so proud when they finished it. I took a quick picture of them with the completed puzzle, and then they immediately dove in together, tore it apart, and put it back into the box. 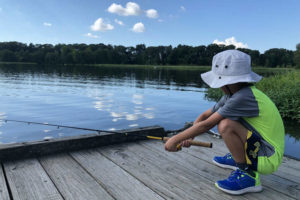 While we were visiting Maryland’s Eastern Shore, we also managed to get in a short fishing trip with the boys at Tuckahoe State Park. It is a lovely park, and our two fishermen fished while we sat on a floating pier.

They didn’t catch anything—maybe because we were fishing too early or late in the day, or maybe because the worms weren’t as yummy as they looked. But it was a beautiful way to spend a couple hours.

Then we stopped by a playground there built out of old tires. It’s always fun to have a consolation prize when you don’t catch a single fish.

Every morning one of our sons wakes me up. It’s almost always our older son, who is 10. We talk for a few minutes, and then I put on my glasses and we lie there talking a little more before I get up.

But yesterday morning, he was thinking of how he had to bring an object to school that he could write a story about. I loved this idea so much, and we were actually deep in a conversation about what he might take to school when I felt something fall next to my eye. It seemed heavy for an eyelash, but what else could it be?

I reached up and found a tiny screw lying next to my eye. The next second one of the little plastic pads that holds my glasses in place fell in the same spot.

I’m not mentally sharp in the morning, but at that point I realized my glasses were falling apart. I took them off and switched to my old glasses until I can take the broken pair, which I have owned for one whole week, back to the eye doctor and ask them to fix them. 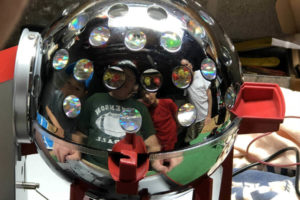 I’ve been wearing glasses for 37 years, and I have never worried about having pieces of them fall into my eyes while lying on my back in bed.

(I’m including a photo of a toy nuclear reactor my father-in-law fixed last weekend because it’s so much more fun than a photo of broken glasses.)

My parents have a bat in their house—or they did about a week ago. No one has seen it since, so we can’t confirm or deny its presence. So we don’t know whether they still have a bat.

When I told our children about it, our younger son said hopefully, “Is it a wooden bat?”

Sadly, no. That would be much easier to resolve.

Find more quick takes on Kelly’s blog, This Ain’t the Lyceum, and have a great weekend! Happy birthday to the Blessed Mother tomorrow.