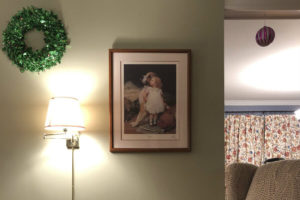 Christmas is coming, and bit by bit we are getting ready. This week we put up the tree and decorated it, and the whole living room feels different. I love hanging the ornaments and thinking of the people who gave them to us or where we were living when we first added each one to our tree.

Before setting up the tree, my husband cleaned the entire living room. Then he hung a few new things on the wall, including an old print from Haussner’s, a restaurant that closed in Baltimore nearly 20 years ago. My father bought the print for me when we went to eat there for the last time. John had had it framed for me for my birthday this summer, but we hadn’t decided where to put it in our home until this week. 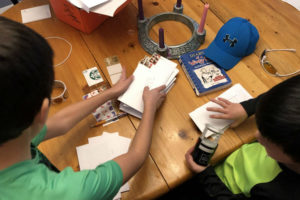 Do you send Christmas cards? I love sending and receiving them. I wish I could send one to every single person we know. But cards and stamps are expensive, so it’s hard to send to everyone. Some people we only hear from during the Christmas season, so they stay on the list forever. And, every year, of course, we have new people to add.

While our boys were helping me get the cards ready for mailing, I said, “What would you do if you send cards to people every year, but they don’t send cards back?”

One said, “If you don’t get a card back, you shouldn’t send one the next year.”

The other said, “You should still send one because it’s nice.”

There’s the Christmas card dilemma in a nutshell. 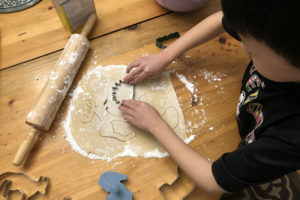 It’s not Christmas without cookies, so we’ve been baking this week. One night I made cookies and couldn’t figure out why the parchment paper got stuck to the cookie sheets. It was only the next night when I baked again that I realized I had accidentally used wax paper and not parchment paper. Ugh. I don’t recommend doing that. The cookies turned out fine, but cleanup was messier than it should have been. 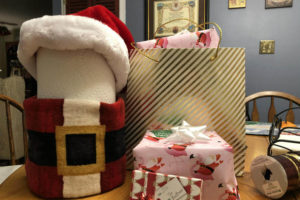 For the past few years, we have been giving paper towel snowmen as gifts. But this year my boys said they thought it was kind of a boring idea. My theory was that everyone can always use another roll of paper towels and a kitchen towel, but I could also see their point. I’m always open to trying something new, and I can see that as you get older, carrying paper towel snowmen to school may be a little uncool.

We did, however, buy a couple towels that looked like Santa’s clothes and made two Santa paper towel sets—one with a face and one without. They were cute, and we had fun picking the two people who would receive them. 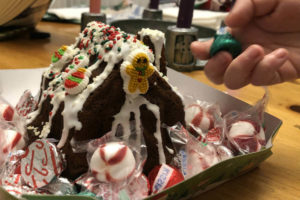 One of my colleagues gave me a gingerbread house he and his family made. It’s gorgeous. And it smells delicious. I realized I’ve never actually made a gingerbread house. I almost bought a gingerbread nativity kit I saw the other day, but then I decided we probably didn’t need another way to up our sugar intake at Christmas.

Meanwhile, I tracked down some Harry Potter wrapping paper at the dollar store! I was so excited. I figure I can wrap almost anything in it and it will be that much more fun.

Our children aren’t into Harry Potter, but I have nieces and nephews and siblings who will really appreciate that paper. 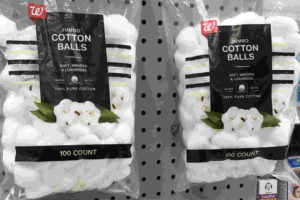 Whenever there’s a party at school, I look at the list of requested items and try to pick an item that I cannot botch. For this week’s classroom party, I signed up for cups and cotton balls. How could that go wrong?

Cups were easy. But cotton balls proved elusive. Does everyone buy cotton balls for Christmas? I had to go to four stores before I finally found some.

I wouldn’t have thought of cotton balls as a hot commodity in late December, but maybe everyone is making crafts with Santa beards.

Nine years ago today we drove home from China. Well, we actually flew from Guangzhou to Beijing to Chicago and got stranded in Chicago. After we landed, we learned that there had been a massive snowstorm on the East Coast, and all flights were canceled. We had been flying for more than 24 hours, and we were exhausted when we arrived at O’Hare to find out we weren’t getting home anytime soon.

It was Dec. 19, and there was no way to get a new flight that close to Christmas. I called my parents collect from an airport payphone, and our friends took us to a hotel because this was back in 2009 before everyone could use credit cards everywhere, and we didn’t have enough cash for a cab.

We ended up renting a car and a car seat and driving home from Chicago. Our new 2-year-old had never sat in a car seat in his life, but miraculously he cried for about 30 seconds and then settled in for the ride. We sang and played games and ate lots of Cheerios. That drive ended up being a highlight of our adoption trip.

We wanted very much to be home, but we were back in the United States, we knew we were getting closer to home all the time, and we were together. We introduced our little boy to his first McDonald’s cheeseburger, laughed as he ran laps around rest stops, and drove straight to my parents’ house because we had traveled without a key to our house. We sound terribly unprepared, but they were supposed to be our ride to and from the airport.

So nine years ago today we finally made it home, home for Christmas, home forever.

Read more quick takes at Kelly’s blog, This Ain’t the Lyceum, and enjoy this last weekend of Advent!