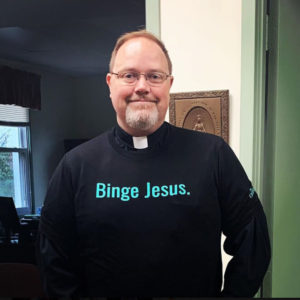 This is the essential invitation that Christ offers every disciple, and in Dallas Jenkins’ series The Chosen, we hear Jesus invite many people to just that: “Follow me.”

There’s something exhilarating for me to hear Jonathan Roumie, who portrays Jesus, zero in on James and John or Peter or Matthew and invite them to upend their lives to accompany him. Jesus, in this series, is so real, so human, and so … “follow-able.”

In the morass of streaming series that we are offered by Amazon, Netflix, and Disney Plus, it can be difficult to find something that we can watch and truly be edified (let’s face it, The Tiger King ain’t advancing our civilization).

However, something came through my social media feed a few months ago that intrigued me. It was an invitation to download an app that was a series: The Chosen. “The first full-length television series about Jesus,” it was touted. I took that particular clickbait.

And, to continue the metaphor, I was hooked! This show is the real deal. Even from a secular point of view, it has outstanding writing, videography and acting. The show details the lives of the first disciples whom Jesus calls – starting with Mary Magdalene, whom Jesus redeems from the grip of terrible possession.

The emotion, humanity and faith of this series will get to you. You will want to binge it (there are only eight episodes from Season One at present). The app invites you to view for free (and they absolutely mean that); however, you also have the opportunity to “pay it forward” – making a donation in varying amounts in order to allow other people to stream it, while at the same time funding the creation of further seasons.

I am all about this show. Rather than connecting some pop culture offering of this moment, I want to promote The Chosen because I want to promote Jesus and discipleship. That’s what the show is about. The disciples are real, flawed, and redeemed human beings who want more from life. Jesus offers that to them, and they follow. We know the story – we’ve seen it portrayed so many times.

In the final episode of Season One, the Samaritan woman at the well gleefully announces that she is “going to tell everyone” about Jesus. You can feel her joy; you really can. Do yourself a favor and download The Chosen app to your smart phone or tablet. You can also find it on YouTube. I am telling everyone about it.

Father T. Austin Murphy Jr. is author of the "Diamonds in the Rough" blog for the Catholic Review, contributing commentary on finding faith in popular culture.

Father Murphy is pastor of Christ the King in Glen Burnie and previously served as pastor of Our Lady of Hope, Dundalk/St. Luke, Edgemere and associate pastor of Our Lady of Mount Carmel in Essex. The Catonsville native is also a former Catholic chaplain at Towson University and a vocations director for the Archdiocese of Baltimore.