This isn’t the first time I’ve found inspiration in “It’s a Wonderful Life,” and it won’t be the last. Early in Frank Capra’s classic film, Mr. Gower, the druggist, in grief over losing a son – to the flu pandemic of a century ago, incidentally – fills a prescription and asks young George Bailey to deliver it to a home. George sees that his boss made a potentially fatal mistake with the order, and doesn’t complete the errand. For his good deed, he gets violently beaten by the old man, who finally recognizes his error and then George, for the angel that he is.How many times since mid-March have I blown a trifling matter out of proportion and morphed into the impatient Mr. Gower, barking at someone and failing to see that they were just trying to help me?

Some of that frustration has been directed at co-workers, as we work from home and adapt, some of us – me – slower than others, to new online tools and applications. My workload peaked March 24, when the April issue of the Catholic Review went to press and the best damper on my anxiety was empathy for the lives around the world put on hold by the postponement of the Tokyo Olympics. Flashback to the 2000 Games in Sydney, Australia, 14 time zones ahead of Baltimore. I was the antsy one then, waiting what seemed like an eternity – it was probably 75 minutes – for someone at The Sun’s old website, Sunspot, to get to the office pre-dawn and post my bylines on developments involving a young Michael Phelps and other locals. 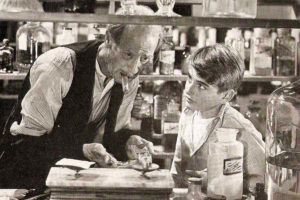 On March 26, two days after the Review went to press, I snapped at my wife as she tried to maneuver around me in the kitchen and get to her job, at a chemical plant deemed essential, with a retort worthy of a 12-year-old: I’ve got to go to work, too! Never mind that my office was down the hall, and I had yet to shower and dress for the day’s tasks. A week later, the mindset is slightly more mature, centered by a health care industry under siege, the fact that proper funerals cannot be held, and a milestone that guarantees that the coming Holy Week will not be the most memorable seen in my household recently.

My faith rituals include helping lector the Passion at Our Lady of Mount Carmel in Essex, usually alongside Mary Pat Seurkamp, president emeritus of Notre Dame of Maryland University. In 2018, Good Friday fell on March 30. Suffering from shortness of breath all that week, I had to nap before taking to the ambo. Readying for bed that night, I hollered at my wife to call 911, that I was having a heart attack. Four days later, on April 3, Easter Tuesday, a planned triple bypass at MedStar Union Memorial Hospital ended up being a quadruple, the only grand slam I’ve ever hit. The most frightening aspect of the ordeal was regaining consciousness intubated and on a ventilator, feeling like Ridley Scott’s Alien was rooting in my chest. From the other side of my ICU room, I was briefly able to see my wife, Mary, a comfort denied COVID-19 patients and their loved ones.

Weeks later, Reza Abrishamchian, my cardiac surgeon, discharged me from his care and got a hug in return. Early in 2019, I went looking for the young EMT and paramedic crews that tag-teamed me to MedStar Franklin Square Medical Center, but struck out. Which brings us, thank you for your time, to Easter Sunday 2018 at Franklin Square. It was April Fools Day. The previous night’s NCAA basketball semifinals, which produced a Villanova-Michigan good guys’ final, was a nice diversion. Amid a steady stream of nurses, doctors and family, which tested my sometimes misguided preference for solitude, one knock on the door stood out. 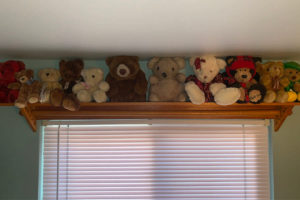 A tiny, older woman who appeared to be Filipino entered my room, introduced herself as an extraordinary minister of holy Communion, confirmed that I was Catholic, and asked if I wanted the sacrament. After exhaling, preparing with her and receiving such, I inquired about her home parish. “Annunciation,” she said. That’s in Rosedale, in northeast Baltimore County.

So it was that a few weeks ago I emailed Conventual Franciscan Father Tim Dore, the Annunciation pastor, with my missing-persons search. He shared it with Sister Sue Engel, a Mission Helper of the Sacred Heart and his pastoral associate. Sister Sue wrote back, “The name of the woman I believe who brought you Communion on Easter Sunday was Imelda Pacis.” We visited, on the phone, of course, the morning of April 2. Pacis pointed out that there are other Filipino women from Annunciation who serve as Eucharistic ministers in hospitals. It could have been, for instance, her sister, Evangeline Palma, but Pacis acknowledged, “I’m a short person.” Small in stature perhaps, but big in Spirit. She came to the U.S. in 1967, from Manila. She began taking Communion to the sick in 1997, first at Johns Hopkins, then at Good Samaritan, and now at Franklin Square.

Why, I asked, does she do that?

“Maybe it’s my calling,” she said, adding that she misses being able to do so during the pandemic. “It’s very rewarding.”

I told Pacis about a tradition of my wife’s that dates to the 1990s, when I was regularly on the road for work. When NCAA March Madness had me celebrating my birthday away from home, I came to expect Marriott room service to deliver a snack basket and stuffed animal, usually a Teddy bear. I’m typing beneath a window shelf adorned with 11 of them, as seen in the photo above. The newest toy in the menagerie is a bunny rabbit, purchased at the Franklin Square gift shop and received on Easter Sunday 2018. It’s my favorite. 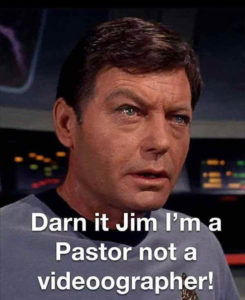 You know times are weird when you thank God for suffering heart failure in 2018, rather than 2020. Weird enough for me to order running shoes online, even before Maryland shut down. I’ll lace them up at some point today and head out for a 3- or 4-mile jog, armed with a new Apple watch that instigated my very best imitation of Mr. Gower at his worst.

Upon my officially becoming a senior citizen, Mary gave me that gift. I was using Microsoft Teams, Zoom and other online tools for the first time, and in full Alvin Toffler, Future Shock mode, i.e., “too much change in too short a period of time.” (Thank you Father Andy Aaron, for sharing the accompanying Star Trek meme on Facebook, It’s nice to know I’m not alone). With all that on my plate, how dare my wife of 36 years add to the challenges I was facing? How unthoughtful!

OK, I finally got my myopic eyes off my high horse, and remembered that all of my doctors recommend strenuous exercise, which helps maintain healthy blood pressure. Mary, my primary caregiver, recognizes that, as well as the necessity of me being able to contact someone if I run into trouble while I’m out there. My first high school track and field race was 50 years ago this month. I’m slower than ever, but in Mary’s mind, still capable of setting the pace in the Baltimore 10-Miler.