Our younger son has loved birds for as long as I can remember. And, at some point during this pandemic, he started asking for a pet bird. 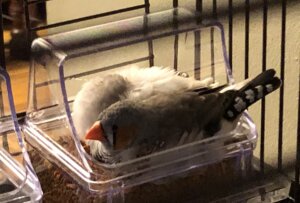 I was sure my husband wouldn’t be on board with the idea, but he never opposed it. And I found myself realizing that if we were going to do something crazy like get a couple birds, we might as well do it while we are home basically all the time.

So, even though we have hardly left the house since March 13, we made an exception to go pick out two zebra finches at a pet store near our house. We got a cage and bird food and cuttlebones and a little bird bath and all kinds of things I never thought I’d buy.

Now we have two little zebra finches. They are cute as can be. They flutter around and chirp to each other and cuddle up next to each other on their perches. 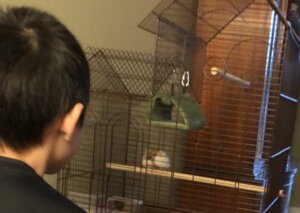 The boys sit and watch them together. It’s all just so very sweet.

The white one is named Fred, and the one with the zebra markings is named George. They’re named for the Weasley twins as a nod to the Harry Potter reading frenzy we’ve undertaken during the pandemic.

I never thought I would be a bird owner, and I never planned to become one during a global pandemic. But here we are, and I think these two tiny little creatures are going to bring our family lots of pleasure.

This summer is for the birds.