I’m not a big basketball fan. The last time I got excited about March Madness was a few years ago when the Loyola Greyhounds made it to the NCAA Tournament.But I am not my 11-year-old nephew. When Origen heard that March Madness was canceled, he was very, very, very sad.

Every year the Beyer grandparents, children, and grandchildren fill out brackets with teams. Then I pay very little attention, and everyone else sends a series of fun-filled, trash-talking emails flying around the horn. (My nephew will either be blown away by my use of sports lingo there, or he’ll sigh thinking that poor Aunt Rita doesn’t know the difference between baseball and basketball.)

Anyway, this year, in the midst of his disappointment, Origen came up with an idea. Under his direction, everyone in the family has picked two favorite fictional characters, and he built a bracket.

Face-off…er tip-off?… is tomorrow. Origen and his mom, Maureen, will FaceTime as many of the cousins as they can. Technology might not allow for everyone to be on. At a minimum, though, each of the two competitors in that round will take a pack of cards and pull a card at random. Maureen will flip a coin to decide whether high or low wins, and the round will be done. 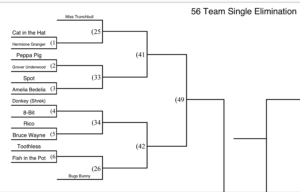 I’ll be honest here. I don’t fully understand the rules. I can’t guess how many days it will take. I just know that this is going to be intense. It’s going to be a little crazy. And, I hate to say this, but we might actually enjoy it even more than the so-called “real” March Madness.

Sometimes when life gives you lemons, you have to pick Limony Snicket to win March Madness. Though, come to think of it, no one picked Limony Snicket.

May the best fictional character win. And, if that happens to be Louis the Swan (of E.B. White’s Trumpet of the Swan) or the Fish in the Pot (of Cat in the Hat), I’ll be trash talking for the rest of the month.

I just wish I had time to have T-shirts printed before everything kicks off tomorrow.