When I first opened Laura and Franco Fanucci’s book, Grieving Together: A Couple’s Journey Through Miscarriage, I stopped on the dedication page.”For the one we never got to hold.”

Such a simple line, but it went straight to my heart. And, truthfully, I expected nothing less of a book written (or co-written, in this case) by Laura.

If you’ve read Laura Fanucci’s powerful blog post, “This is the story I have to tell you,” you know that her writing is invariably moving and thought-provoking and beautifully rooted in spirituality.

Grieving Together is both beautifully and practically written. It is, in fact, the book Laura and Franco wish they had had when they miscarried their third baby. In addition to that little one and their twin girls, Maggie and Abby, whom they lost within days of their births, the Fanuccis have four boys on earth.

It’s also a book that I think anyone would benefit from reading. We all know someone who has miscarried a baby, and I’m sure I’m not alone in struggling to know how to be helpful and supportive.

Last week Laura and I connected by phone to talk about Grieving Together and had the most delightful conversation. 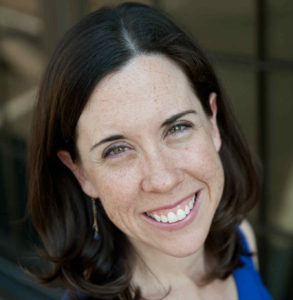 How did this book come about?

The funny thing was it was not of our doing. It was Our Sunday Visitor that approached us in late 2016 and asked if we would write a book on miscarriage for couples. It was still the year that the girls had died. Even though it was still so early in our grief, I really had this sense that it was a calling.

How did your husband feel about the idea?

We’ve done NFP witness and marriage prep. That’s always been a really wonderful service as a couple, so when this happened, I thought it was so in line with what we have done as a couple. I still had to say, “Hey, you’re a good writer. I know you’re not a writer by profession, so do you want to give this a try with me?” I think he thought it was totally nuts, but he was totally on board. Having gone through infertility and miscarriage and infant loss, really this is the guide we wish we had had. Maybe we can bring good out of this suffering in some way.

What was it like to write a book with Franco?

You know what? It was a lot of work, it was a big challenge, and we joke that that was the last book we will write together. In the past, he would help with the kids, and I would lock myself in a room to write. You can’t do that when you’re both writing. In terms of the content, we made an outline, and that kind of launched us into the back and forth. Everything we did, we did together. I didn’t want this to be my voice; I wanted it to be both of us. We would divide it up and go back and forth, but it did come together at the end. It was better for both of us having done it. He brought such perspective to it. That was really beautiful.

How is Franco’s perspective on miscarriage different?

My husband has so many stories about the way that our society really brushes aside men’s grief. He would be talking about it and he’d have co-workers who would say, “Yeah, how’s Laura?” And he’d say, “It’s really hard on both of us.”

How are people responding to the book?

I have started to hear from readers, which is so cool. The first two or three readers that reached out to me were speaking about parts that Franco wrote. I remember showing him and telling him his words were touching people and seeing his face. It was really beautiful.

What do your sons think of their parents’ writing a book?

They don’t see it as anything special. The only thing they are ever impressed with are how many pages are in the book. When we said we were working on a book, they wanted to know whether we were putting it together and binding it. No, we just write it and we send it, and then other people edit it.

Maybe they’ll feel differently about it when they’re older.

I think it will be interesting to see as they grow. There are things my parents went through before I was born, and I think, “I wonder what they thought about that.” We really wrote honestly and vulnerably about some of the hardest things we went through as a couple. How will that help them in the future?

What do you hope the book will accomplish?

First, I hope that it will help couples in their grief together. I hope it will help them understand more about how their spouse is grieving. Very rarely are we on the same page as our spouse. This doesn’t mean that the spouse doesn’t love the baby. People deal with things really differently, so we just need to support them in that.

Also I want to let them know that they aren’t alone. We wanted them to know it’s so much bigger than our experience. We invited 14 or 15 other couples to share their stories. We had to have more couples than just us in this book. This is really big, and it can’t just be our lens.

And I really want readers to know that God is with them. This is something that God cares so deeply about, and the Church wants to minister to them. I want to get this into the hands of priests. Sometimes priests just didn’t get the formation about that, and they need more resources. 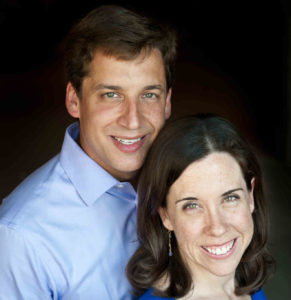 Did you feel Maggie and Abby were with you in a special way as you were writing?

I ask for their intercession on so many things. And I certainly asked them for help on this book. I did feel this sense that it was a way to honor their lives and the legacy of their lives and how many people they touched by their very short lives.

I also found myself thinking about the baby we lost through miscarriage. That was so hard when we went through it. While we were writing, we felt we really got to mourn the life of that child, too.

How did writing Grieving Together help your marriage?

There were so many times I would read something he had written, and I would look up and say I didn’t know you felt that way. I thought we talked it out, and this showed that we never fully know the mystery of who our spouse is. It was beautiful to see his love for our kids and his love for me reflected in what he wrote. That was really beautiful.

You can find Grieving Together: A Couple’s Journey Through Miscarriage here.