Please join me in praying for all those affected by the tragic shooting at the Capital Gazette. Annapolis is such a warm, close-knit community. Although I never worked at the Capital, I worked in Annapolis for three years and knew some of the reporters at that time.

In an earlier part of my life, I spent five years as a newspaper reporter, and I remember the camaraderie and the hunger for truth that brings newsrooms together. It’s a difficult job, but an amazing one, and journalists are people who have a deep passion for their work and for their colleagues.

Please pray for strength and comfort and peace for all those who are left behind and for the souls of those who were killed. It is just heartbreaking. 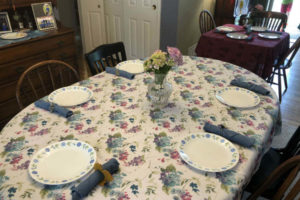 The other night when we were inviting friends over to dinner, I was looking for flowers for a centerpiece. We had a few pale purple ones from our garden, but I glanced outside and noticed that our neighbors’ hydrangea bush was covered in gorgeous deep-blue blossoms.

“Look at their hydrangeas,” I said. “We should invite them to dinner tonight.”

“Are you inviting them just for their flowers?” Leo asked.

But he didn’t believe me. We decided not to invite them because it was raining and we didn’t have much room for the people on the guest list. But a day or two later when my husband was chatting with our neighbors, he mentioned how much I had been admiring the hydrangeas. Our neighbor cut a few blooms and sent them home with him. 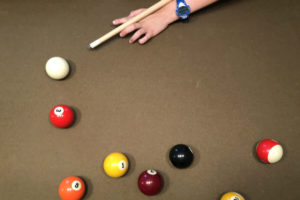 Our boys are really excited about pool time this summer—as in, swimming pool time. My husband’s twin niece and nephew just graduated from high school, and we were invited to their graduation party.

“Are we going to a pool party?” Daniel asked me.

Who doesn’t love a pool table? He ran to put on his shoes, and both boys played pool almost the entire party.

Summer reading is still humming along at our house, and the boys are taking earning “Buettner bucks” for reading time seriously. But I have definitely seen the initiative tapering off a bit. That’s fine because I was afraid I might be broke by the end of the summer when one child earned $11 in one week. But that’s not a bad problem to have.

Yesterday Leo said, “Whenever I say I’m bored, why do you always tell me to go read something?”

Because, of course, that’s what mothers do. 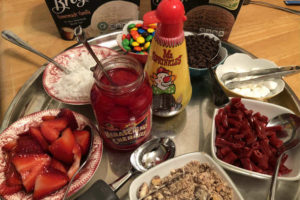 When we invited our friends to dinner the other day, I told them it would be very casual. Then the boys decided to pull out the tablecloth, cloth napkins, and napkin rings and set up a table just for the children. (You can see their work above in Take #2.)

They attached their walkie talkies to their pockets and insisted on taking our guests’ drink orders on little notepads. I hardly had to lift a finger, except to put together the toppings tray for them to present to guests for dessert.

I miss when our boys were younger, but…well…8 and 10 are pretty fantastic ages. They didn’t even argue about who was going to be the butler and who would be the assistant butler. Mileage may vary, but I do love these ages.

How will you celebrate Independence Day? Every year I think maybe we should go see some fireworks up close. But then there are people in the neighborhood setting them off, and we have our neighborhood bicycle parade, which is as exciting as the Fourth of July can get. So we usually stay home and do something wild like catch fireflies and eat popsicles. 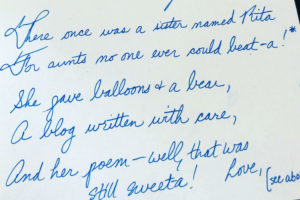 When our newest nephew was born a few weeks ago, I sent balloons to his hospital room with a limerick that I would share here if it didn’t include his name. This week he wrote back—this precocious fifth child of a fifth child born in the fifth hour of the fifth day of the sixth month of the year.

His limerick, which is, of course, five lines long, reads:

There once was a sister named Rita

For aunts no one ever could beat-a!*

She gave balloons and a bear,

A blog written with care,

The asterisk sent me to a line on the card that read: “All other aunts who read this poem: This line is an ambiguous compliment and should not give offense.” But I wasn’t offended. And if you are, you aren’t now that you’ve read the note by the asterisk.