Happy 5th day of Christmas! My sister Treasa is helping my dreams of a Christmas-carol-themed potluck come true, serving “Jingle Balls” meatballs, “Frosty the Salmon” salad, “We Three Wings,” and asking me to bring “Feliz Navi-dip.” I might also make some “Mashing Through the Avocado” (guacamole) accompanied by “I Saw Three Chips Come Sailing in.” I’ll also be bringing some “Rudolph the Red-Nosed Root Beer,” as pictured.

That is, of course, assuming that my family is healthy enough to participate in a family dinner. There has been an illness—or maybe two?—making the rounds through our extended family this holiday week. So we’ll see who’s still standing at dinnertime. 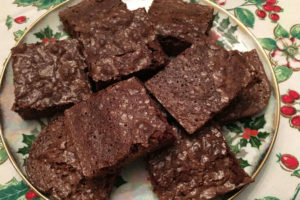 We went to see The Last Jedi at the Senator Theater! I can’t tell you what I thought of the movie, and it’s not because I’m worried about spoilers. It’s that we weren’t even an hour into the movie when one of the children was too scared to stay. So we walked around Belvedere Square for a while until the movie ended and we could reunite with our fellow movie-goers.

When we did, those who had seen it rushed to tell us everything that had happened during the rest of the movie. It was hilarious, especially when there were disagreements over what had occurred. I’ll see the whole movie again someday, but I’ll survive until then.

Besides, while we were roaming the area waiting for the movie to end, we stopped into a second-hand store, The Wise Penny, where we found a used baseball bat for $1 and a lovely Christmas plate. I filled it with brownies that night and I’ve never seen brownies disappear so quickly. 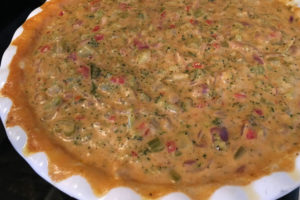 My parents offered to host Christmas dinner, which has been ours to host for the past few years, mostly because my sister and brother-in-law who have the newborn twins thought going to their house would be easier. I can’t say whether the arrangement made Christmas dinner easier for the parents of four children 3 and under, but it was certainly easier for me!

My mother asked me to bring the hot broccoli dip I have been making for about 25 years. As I cooked, I was surprised to be thinking so much about my brother-in-law Eric. Eric died suddenly this fall, and the dip was one of his favorites. He always wanted me to add extra Tabasco. He even talked me into adding some ground red pepper and even cumin.

I finished making the dip—with less Tabasco than Eric would have wanted—and I brought it to my parents’ house. My family devoured it. Even my 20-month-old goddaughter parked herself next to the dip so she could eat it.

It was good. But it made me think how many dishes evoke memories of people who are important in our lives. The holidays can be an emotional minefield. 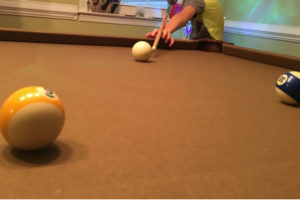 We spent Christmas Eve visiting my husband’s family, and we discovered that my brother-in-law and his family had replaced their dining room table with a pool table. They are the second family I know to do this.

Our sons have been wanting to try their hands at pool, but where do you take children to play pool? They couldn’t wait to play. Watching seemed a bit stressful—excited children holding long dangerous sticks?—so I left the room for a while. When I came back, I discovered that they had really improved.

Of course, I keep thinking of that line from the song in The Music Man, “Trouble with a capital T and that rhymes with P and that stands for pool.” Still, it made for a fun Christmas Eve, and the boys fell asleep as soon as their heads hit their pillows. That’s a victory I’ll take any day. 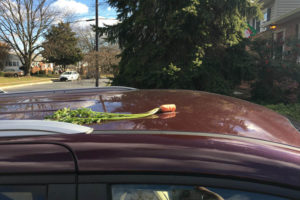 As we always do on Christmas Eve, we left cookies for Santa on our dining room table and carrots on our front porch for his reindeer. Santa ate most of the cookies—chocolate chip are clearly his favorite—and his reindeer tore through the carrots, leaving the remnants on our front yard.

We found one of the carrots on the roof of our minivan. I assume a reindeer dropped it as the whole crew flew away.

I do love a little Christmas magic.

I hope you enjoyed a beautiful Christmas. Our boys were up by 6 a.m., and by 7:30 everything had been unwrapped, assembled, and played with. It was easy enough to get to the 10 a.m. Mass on Christmas morning at our parish. There were plenty of seats, lots of parking, and it was so much more peaceful than the crowded Christmas Eve Masses.

I know many people have family gatherings to balance at Christmas, but I will never understand why more families don’t come to Mass on Christmas morning. It is so peaceful and lovely and so much easier than fighting the crowds on Christmas Eve. 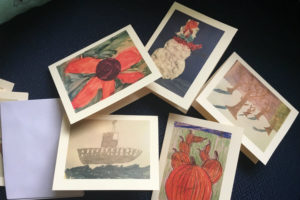 At the very last minute on Christmas Eve morning, I had an idea and asked Daniel, who is 8, to draw a few pictures. Then I photographed them, along with some of his other art and his brother’s, and made notecards for Daniel’s godmother and both grandmothers.

Read more quick takes at Kelly’s blog, This Ain’t the Lyceum, and have a wonderful weekend—and happy New Year!