Summer is really here! We went to sign up for summer reading at the Enoch Pratt Free Library. The boys’ aunt (my sister) works there, so we always register there. It’s a terrific program—and I would say that even if we didn’t have an aunt working there.

We always stop to see the fish in the children’s department, and sometimes we play with the oversized chess set. This time we got lost in the maze walking into the library because it’s under construction. 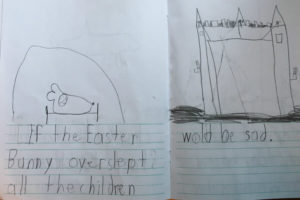 I finally emptied out the backpacks from school. As I was flipping through the folders and workbooks, I was thinking that there wasn’t much worth hanging onto. Then I came to a page where Daniel had written about the Easter Bunny and drawn a beautiful, creative picture.

“Tell me about this picture,” I said, because someone once told me never to ask, “What is this?”

But you can probably tell that the Easter Bunny is oversleeping on the left, and on the right children are crying a moat of tears around a castle.

If this is the only outcome from the school year, it would be worth it. And of course we achieved much more than that. But I’m not hanging onto much else. 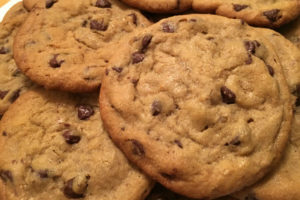 We celebrated Father’s Day with air-powered rockets at the park, Matthew’s Pizza, and homemade chocolate chip cookies. Then we gave Baba a few books he had on his wish list (blah) and a baseball glove he hadn’t (yay!). Daniel could not wait for his father to open the glove, and they had to put it to use right away.

Later John told me that it was his first new baseball glove. I hadn’t thought of that, but naturally the seventh of seventh children isn’t likely to have a glove that wasn’t handed down. Unfortunately for him, he has to share this one with me. 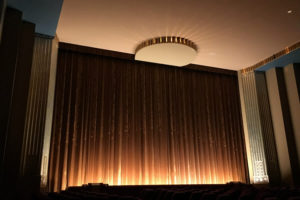 I went with friends to see Clueless at the Senator Theatre on Tuesday night. It started at 9:30 p.m., which seemed a little crazy to me.

But we had the best time, even though we were out later than I have been out in ages.

We tried a new camp this week, and our sons loved it. I had signed them up for two weeks, but I added a third week when I realized how much they were enjoying the experience. My favorite part—besides that they are happy there—is that when I was dropping off the first day, I asked the woman with the sign-in sheet whether it was OK if I happened to be a few minutes after 4.

“Oh, we’re here until 6,” she said. “And if you’re a little late after that, please don’t worry. I know how hard it is to be a family where both parents work outside the home.”

I didn’t exactly burst into grateful tears, but if I had, I know she would have been nice about it.

You know how time-consuming making water balloons can be? I saw these mentioned on Jennifer Fulwiler’s Facebook page and had to try them. They are definitely the way to go. 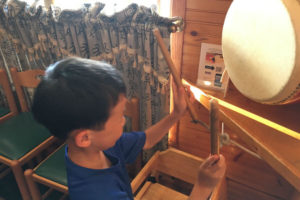 One of our favorite Japanese restaurants has delicious sushi and a drum you can beat on the way out the door. The other day we went to dinner there, and one of the waitresses stopped to ask us about our children. She told us she is from Shanghai.

“Are they brothers?” she asked.

It’s not the best answer, but it’s the one I use because it explains just enough and  lets us move on to other topics.

We had a long conversation about China and not much about adoption, and as we parted I thought of how over time I worry less about the conversations. People ask questions. We answer what we want, how we want. But we try to assume that the people asking are kind people who have good intentions, and that makes a difference.

Read more takes at Kelly’s blog, This Ain’t the Lyceum, and have a wonderful weekend!