My children teach me something almost every day. This week one of our sons said, “If teleportation was possible, the world would be much better.”

Who can argue with that? 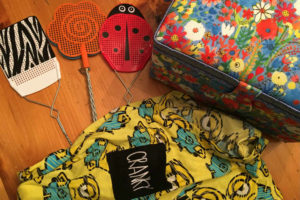 Did I mention it was my birthday this week? Yes, yes, I did. It wasn’t a special one, but every birthday is special, of course. On the night before my birthday, John came home with a new TV. It wasn’t my birthday gift, but it was a nice perk. He gave me flowers and took me out for a fancy Italian dinner. My oldest sister sent me a Harry Potter beach towel. My youngest sister gave me a cloth bag with a line from a Conway Twitty song, “Hello Darlin’”. My parents gave me a sewing box, a glass pitcher, a sun hat for the beach, flyswatters, and a Minions nightshirt that says, “Cranky” on it.

I don’t know what it means when your mother gives you a nightshirt that says, “Cranky,” but I’m pretty sure she got it for a good price.

I received cards and lovely, thoughtful gifts from friends and colleagues. Then today my friend Father Brown showed up at my office door with a bouquet of flowers for me.

What a fantastic birthday. 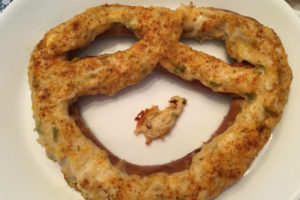 My oldest sister and her four children were visiting from out of town last weekend when I mentioned I had a crab pretzel in the fridge.

“What’s a crab pretzel?” she asked.

Apparently even though she grew up in Baltimore, my sister has never met a crab pretzel. Maybe crab pretzels didn’t exist when we were younger? Maybe we just ate them and never shared? I don’t know. But we had to change that. How lucky that we discovered this problem and solved it so quickly.

The moral of this story is that you should always have a crab pretzel in your fridge.

We’re a little obsessed with Pokemon cards, but I think we’ve moved into a new place now that we have started going to local meetings of both a Pokemon Club and a Pokemon League. This weekend we’re going to a Pokemon Pre-release Tournament, where our children will receive packs of Pokemon cards before they are released to the world.

I can hardly believe it myself. 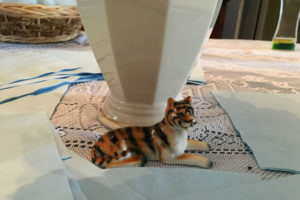 As we were setting up for a prayer gathering for an expectant mom, Daniel pulled out his porcelain tiger and put it in the center of the table.

The boys also placed the napkins in a beautiful circle display around the tiger. It was a bit unorthodox, but no one asked me where to find a napkin.

And no one asked where the mascot was either. 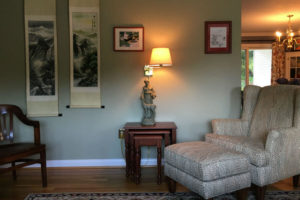 Our new living room arrangement excites me every time I walk into the room. I think I like it even more because it took us a while to reach this point where the furniture mostly matches and is in place.

I still need to figure out what is going on display in the cabinet and bookcase, and we need to think about what to put on the walls.

But let’s just celebrate the fact that the room looks put together. I feel like such a grown-up.