Do you call those flying insects that light up fireflies or lightning bugs? I call them fireflies, but my mother says they are lightning bugs. I can’t decide why I don’t use the same term she does.

I have been off from work this week and enjoying my staycation with our boys. This week we decided to have a “Pokemon Camp” with friends, as in a series of Pokemon-related play dates and a few Pokemon Go outings in the area. 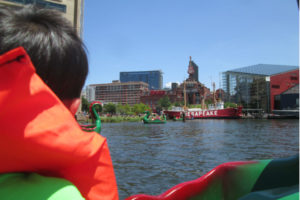 We started by going down to Baltimore’s harbor, where we became tourists for the day. I realized we rarely do any of the touristy things people do in Baltimore. The boys and I rode in a dragon boat on the harbor for the first time, paddling around and arguing about which way to steer. It was fantastic. And there’s a fountain that children can play in near the Maryland Science Center. It’s apparently been there for years. I should really go to the harbor more often.

We are so excited for today. We have been so excited for every day. It has been a terrific week, and I’m sad to see it coming to an end. Still, July is just beginning, and this is my favorite month. We have lots of summer left to enjoy. And, as far as Pokemon go, we have yet to catch ’em all. But we are determined.

The other day as I was tearing the kitchen apart to try to find my chili paste, I realized how much my cooking has changed thanks to my children and growing our family through international adoption. I never even knew what chili paste was until a couple years ago. And here I am worrying that the beef with broccoli won’t taste right without it.

And I’m not really much of a cook. It’s just that I like to cook meals the whole family will eat, and I have greater success getting everyone interested in Asian meals than many other meals.

We had to get a prescription for both boys on Friday, but the pharmacy only had enough for one. So I picked it up, paid $25 for it, and started both of them on it—since it was the same prescription, and we knew how much to give. Then on Monday I went to pick up the second prescription, and it cost $205.

I had forgotten that as far as our health insurance is concerned, the year begins July 1, and our deductible has not been met. So the prescription cost nearly ten times as much three days later, just because the pharmacy was out of it on Friday. 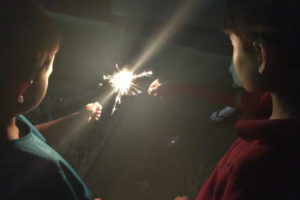 How was your Fourth of July? Our boys rode their decorated bicycles in the neighborhood bicycle parade—the first year they have both been able to ride without training wheels—and I was so proud of them.

Then we watched fireworks in our neighborhood because the larger displays don’t appeal to me that much. I don’t look forward to getting trapped in a parking lot, and although I am more relaxed about bedtime this summer than I have ever been before, I still know the ramifications of children who don’t get enough sleep. They’re almost as severe as when parents don’t get enough sleep. So we stayed home, tried sparklers for the first time, and watched a few fireworks. 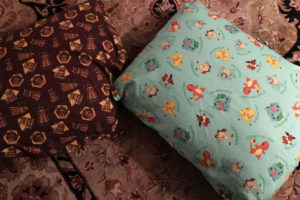 We are finally getting rid of the old couch in our living room that came with our house. Our children love it, and I love not worrying about whether they spill things on it. But the time has come to say goodbye.

They are not happy, so I told them we would keep three of the cushions. They use those cushions for all kinds of reasons. I took them to buy fabric to cover them, and they picked out two Pokemon fabrics and a Doctor Who fabric.

Then they sat down with me and helped me sew the new covers on by hand. We had a great time making them, and now we have these skilled people who can sew in the family. 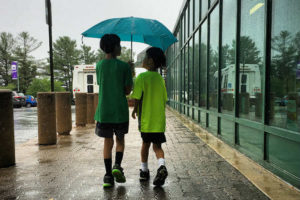 As we were checking out in the fabric store, I commented to the cashier about the rain, and I said, “Why does it have to rain today?” She replied, “Why not?”

Then she launched into a wonderful story about her father, who graduated from Loyola College in 1958, and was taking a philosophy course there. For the final exam, the professor had written the last essay question on a blackboard behind a projector screen. He pulled the screen up to show that the question said, “Why?”

Her father sat there as his classmates scribbled furiously at their desks. Then he simply wrote, “Why not?” and turned in his exam. He got a perfect score for his essay.