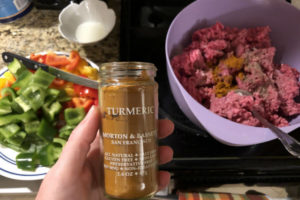 My husband and I have tried several kabob restaurants over the years, and we have a current favorite that is outstanding. They serve Koobideh kabobs, which are a minced-meat kabob.I’m always interested in duplicating a favorite dish at home to save a little money—and also because it’s fun to see what we can create ourselves.

We make beef, chicken, and shrimp kabobs fairly regularly, but I had never tried making Koobideh kabobs. So a few weeks ago I did some recipe hunting, headed to the grocery store, and got started in the kitchen.

I couldn’t believe how easily I mastered the recipe. Everything turned out beautifully that first time.

That may have been beginner’s luck. 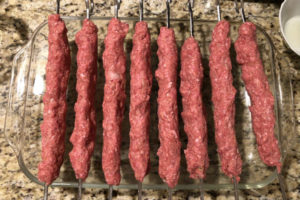 I’m reluctant to share a recipe that I haven’t had perfect success with. But I also don’t want you to miss out on the deliciousness that comes with pulling these kabobs out of the oven. And the chef who created the recipe assures that it takes some trial and error to make it work.

So why not plunge in and see how it works for you? The recipe I used is here.

When you first start reading, the recipe sounds a bit intimidating, but I want to assure you that it’s not actually that difficult. The hardest part is grating the onion. (Stick your tongue out while you grate it, and it won’t be nearly as bad as it would be otherwise.) The second hardest part is shaping the meat on the skewers, but that’s not even as complicated as it sounds. 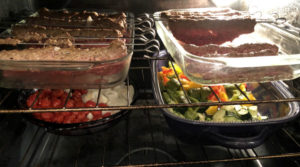 We don’t own a grill, so I used our broiler. I couldn’t figure out how to flip the kabobs halfway through, so I didn’t bother with that step and just cooked them twice as long. They were still yummy—so good I am planning to make them one of our regular dinners.

I used ground beef as the meat. I have tried to make them with chicken, but the ground chicken was too moist and slipped joyfully off the skewers long before I got them near the oven. 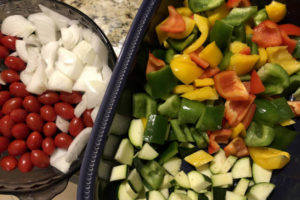 I cut up a bunch of peppers and onions and a zucchini and put them in a dish and cooked them on the next level down in the oven below the meat. I didn’t put those on skewers. I just tossed them with a little olive oil and salt and pepper and started cooking them 5-10 minutes before I put the meat in. I also cooked cherry tomatoes in a pan the same way. The veggies might taste better if they were cooked on skewers, but I was using all the skewers for the meat.

To be extra fancy, I also bought some naan and threw it in for a couple minutes under the broiler after the meat was finished.

Were our Koobideh kabobs as good as the ones at the restaurant? Maybe. Maybe not. But they were close enough to please the Koobideh kabob fans in my household.

I hope this recipe works as well (or even better) for you!