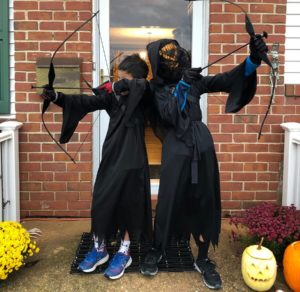 Our sons’ Halloween costumes came together gradually over the past few weeks. The concepts developed, took shape, and then evolved. When I said I couldn’t tell you what they were going to be, it was partly because they wanted to keep them a surprise and partly because I wasn’t sure.

Even once the costumes were on, we had a last-minute tweak—a fairly significant one—to one of the costumes.

In the end, they were done and ready to trick-or-treat. We had the Dark Archer—who was bad—and the Pumpkin Archer—who was good. Good or bad, they were both creepy and spooky, and I’m fairly sure that was at least part of the goal.

And, even with all the worry about the weather, we got in a beautiful night of trick-or-treating, winding our way through our Halloween-happy neighborhood. The neighbors this year seemed particularly happy to greet the children, especially since we all thought Halloween might be rained out or postponed. 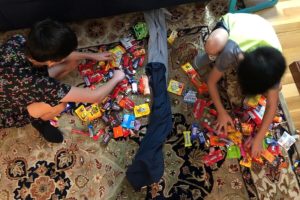 Halloween for me is always a mix of emotions because it’s a fun day, but it’s also the anniversary of the day our nephew and cousin Georgie died.

I remember that day so well, how my 5-year-old was buckled in the back seat in his Darth Vader costume so we could go pick up his brother from preschool and head to Grandma’s house for Halloween treats. We were just about to get on our way when my father reached out to tell me Georgie had passed away in utero at 34 weeks.

That Halloween also fell on a Thursday, and this year for the first time the boys and I set out to go to Grandma’s house for treats. It’s strange how, six years later, I felt something might go wrong to get in the way—just as that day we canceled our trip and I went through the motions to tell the children their cousin had died and then guided them through a night of trick-or-treating.

This year, of course, we arrived quite safely. The boys ran up the sidewalk and steps to leap into the house, collect their chocolate bars and dollar bills from Grandma and Grandpa, and then we were on our way back home for a fun night of trick-or-treating. 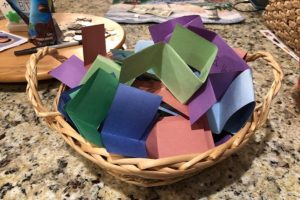 During this month of souls, we are trying something new at home. We filled a basket with names of souls to pray for each day. I cut 30 strips of paper—one for each day in November—but we ended up needing 31. And I know we’ll think of other people we know have passed away who need to be in the basket, so we’ll add them when we do.

We usually do a prayer basket of names of people (living and dead) for Lent, but we’ve never tried just praying for people who have died. Somehow it feels like the right approach to November this year.

We’ll be starting a day late because somehow I couldn’t get this together in time to start on Nov. 1. But I figure that’s OK. As my Uncle Miles (a Jesuit priest whose name is in the basket) used to say, “God doesn’t have a stopwatch.”

When my 5-year-old niece arrived for Sunday School last weekend, she was dressed as a saint. She looked adorable—with a shawl tied around her shoulders and a lovely dress down to the floor. And she was holding an enormous stuffed snake.

I had no idea what saint she could be. I had successfully identified St. George and an angel, but this? I was at a loss.

It turned out she was St. Verdiana. I had never heard of her, but she has a fascinating story. She was a hermit and lived with snakes toward the end of her life. My niece found her in a book, Amazing Saints and Their Awesome Animals, and told her mother that’s the saint she wanted to be.

I always seem to learn more from my students than they learn from me. 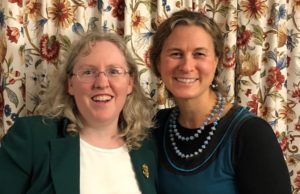 I was working late last Friday afternoon when my college friend Kirsten messaged me. She was in Baltimore for a conference, and she wondered whether we had evening plans.

We had no plans. I was going to go home late and collapse and then probably do some writing. And I hadn’t seen her in years—so many years that I can’t even tell you when it was. But I’m fairly sure it was before we adopted our two sons and before she and her husband had their four children, so that means it had probably been more than a decade.

I invited her to dinner at our house, and we had the best time. We carried in some pizza, opened a bottle of wine, and talked and caught up with each other. She got to meet our sons and spend time with my husband and me. It was such a lovely evening.

Spontaneous plans are so often the best. 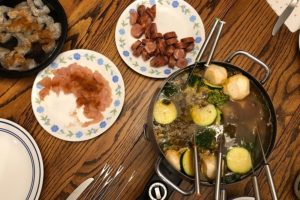 I love cooking, but lately my creativity and energy has been going to other projects that don’t result in food for my family—at least not directly—so by the time it’s time for dinner, I am drawing a complete blank.

Fondue requires some planning and effort, but it also is one of the meals that makes everyone happy, and it feels special and exciting. So, earlier this week we had fondue.

It reminded me that when I’m feeling spread thin and unable to do all the things for everyone, sometimes I just need to do one thing well, and it changes my whole outlook.

If I can serve fondue for dinner, I can do anything.

I cannot believe it’s November! This has been a busy, fast fall. Our older son’s birthday is next week—yay! yikes!—and once that happens, it’s Thanksgiving and then his brother’s birthday and then it’s Christmas and then….

But let’s not rush it. Let’s enjoy this beautiful fall weekend as we celebrate saints and pray for souls.

Meanwhile, you can find more quick takes on Kelly’s blog, This Ain’t the Lyceum.